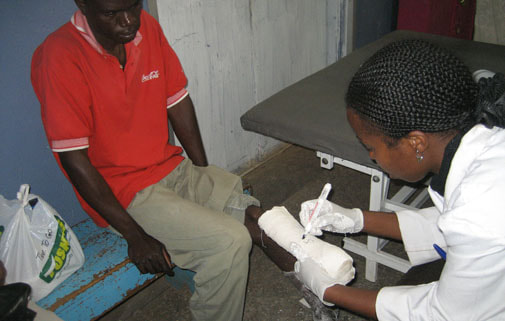 Some people’s lives can change in an instant when even a small accident occurs. This was the case with a young man by the name of Samuel. One afternoon Samuel accidentally stepped on a light bulb which pierced his foot. Unfortunately, the wound became infected. Although Samuel sought medical treatment, the infection became worse and it extended into his bone. After some months he was told he needed a foot amputation. “Lose your foot or lose your life,” he was told. So at a young age Samuel’s life turned upside down. Although the amputation took care of his foot infection, he was left with a significant handicap making it difficult to walk because 90% of his foot was removed; only a small part of his heel remained.

Samuel went into a state of shock and then into a state of depression. Fortunately, he recovered, and he tried to pursue a normal life as a normal man. He hoped he could train in carpentry because he knew he could still work with his hands. So everyday Samuel would stuff his one shoe full of socks and try to put on his normal shoes and walk like a normal man. But he could not. Instead he walked with a big limp and with his amputated foot caused his heal to curve in like a club-footed person. As is common with disabled people in his area, he was treated with disregard and much disrespect.

What Samuel did not know was that there was an orthopedic center that works with amputees and people with deformities in a city about six hours by road from his home. The technicians at this center could help Samuel have a new lease on life. They see unique cases like Samuel’s everyday. It is their business to make orthopedic shoes and limbs for people with amputations and deformities.

SMI learned about Samuel’s case and arranged for him to come to the city for a consultation at the orthopedic center. Indeed Samuel’s case was a challenging one and the first technician turned him away telling him that they could not help. But with persistence, we found the top technician who also consulted on Samuel’s case and he was able to devise a boot that he thought could give Samuel the proper alignment and support that he needed to walk comfortably again. They first took a mold of his heel and leg, and then over a period of two weeks and many fittings and alterations, they crafted a pair of sturdy leather boots that now enable him to walk with almost no limp.
​
Samuel is now back at home and he is able to stand on his feet for much longer periods of time each day. Still his hope is to learn to become a carpenter, and with these orthopedic shoes, we think his dream can become a reality.