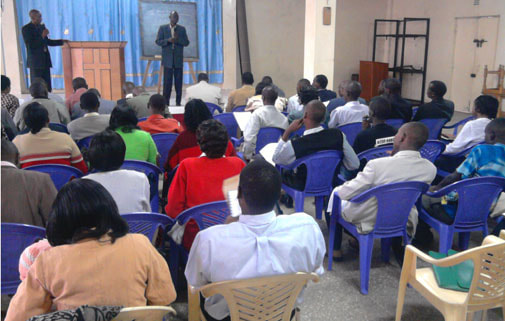 In January 2008, Kenya experienced widespread post election violence after their presidential election. Dandora Nairobi was one of the areas in the country that was hardest hit. Before the post election violence this was a bustling and prosperous area of the capitol city that was full of mixed ethnic families all living in harmony. Almost overnight mob violence and civil unrest turned this community upside-down. Homes and businesses were destroyed, families were torn apart and friendships shattered. With the aftermath of the violence came a changed population. Residents were filled with distrust and suspicion, many struggling with new hatreds, unforgiveness and also guilt. Yet as community members needed to rebuild and concentrate on healing, working together seemed impossible.


As things began to settle down, the churches in the area did not want to lay quiet and keep living in fear that the violence would continue. They decided they must become more proactive. A group of pastors began to meet together on a regular basis to pray and ask God for His help in healing their community.


In their effort to help, these local pastors set out to lead the way and to focus on positive and constructive ways forward. First and foremost, they had to model how people of different ethnics and victimizations (such as themselves), could work through conflict, learn to forgive and work together again. Although this took some time and was challenging for them all, they now testify that through God’s help, healing and forgiveness are possible and available to all who seek it. As they began to share this message with others, they found people becoming released from the grip of fear and distrust that was permeating the community.


Soon this pastor’s group had a vision of growing their efforts by multiplying themselves through offering ministry training to members of their churches. They approached SMI’s training ministry (Light of Africa) to see if we could be available to partner with them and help to achieve their goals of getting many Christians involved in ministry in their local community where tens of thousands of people reside.
LoA got on board and assisted them in an implementation plan which included bringing 2 people from each church to come to a ministry training where they would become better equipped to meet with people in their homes and minister to them. The pastors began to share their vision to get more people involved and inviting specific church members for this training. The response was overwhelming. In fact, there were too many to train in one training, so 2 trainings were scheduled. The first training had over 70 people involved, and during this training they were able to visit dozens of local homes and businesses. The second training is now being organized.
​

The reaction in the community was at first distrust and disbelief, and then people began to realize that these visitation teams were sincere and simply showing them God’s kindness. As a result, many new friendships have begun and there has been more healing and trust building among the neighbors. Their hope is to continue to build good report with neighbors one by one, and to let God’s healing hand sooth the wounds of the past so that they may work together for a brighter and more peaceful future.